Dick and I are Wyoming natives, being born and raised in Douglas, Wy.  I was raised on a 64,000 acre ranch with four brothers.  We raised cattle and sheep commercially, and always had a few dogs and a lot of horses around.  I grew up appreciating good dogs and good horses.

Dick was raised in town on an acreage, and spent summers on his grandfather's ranch in S.D.  herding cattle, haying, fixing fence.  He was one of three brothers.  Those boys had everything from Smooth Fox Terriers, to Boxers, To Weimaraners as pets.  Not to mention the horses in the back corral, and all the other creatures that boys always seem to find and raise.

Dick and I were married in 1969, and continued with the horses and dogs.  We acquired our first Australian Kelpie as a wedding gift, and  it naturally went to working here on the ranch.  That began our association with the Working Kelpie.  We showed horses, team roped, got involved with the Snaffle Bit Working Cow Horses, and did some NCHA Cutting.  I had the privilege of showing a colt we had raised to the World Champion title of Snaffle Bit Working Cow horse at the Appaloosa Worlds in 1986.  In 1990 we started competing in the Working Kelpie national herding trials.  In 1991 we hosted the Working Kelpie Inc National trial here in Douglas.  Since the early 90's we have been involved in the herding on the ranch, at trials, and always managed to attend at least one herding seminar a year.  We have met so many great people in the herding world.

In the late eighties we started standing a couple of studs.  They included an own son of the great Doc Bar, a son of Miss N Cash, a son of Docs Hickory, and finally our last was a son of Buzz Bar.  We tried to raise the using kind of horses.  Many went on to become top using horses in the rodeo arena roping events.

In 2005 we got interested in showing Norwich Terriers.  They are our house dogs.  Since 2005, we have made 5 AKC Champions and seen puppies that we have raised become champions.  The AKC conformation ring has brought a whole different way of thinking home.  While most of the conformation dogs are judged on "pretty", many of them are also doing other things.  We hope to get involved in the Earth Dog events in the future with our little guys.

At the present we live on 200 acres just west of Douglas, WY.  We still raise a few Australian Kelpies, and now the AKC Norwich Terriers.  We got interested in the AKC Herding events a year or two ago and started with a Border Collie(Dick's) and an Australian Shepherd(Edna's).   Kelpies are not AKC registered, they are registered in Australia through the Working Kelpie Council, and in the US with the North American Australian Kelpie Registry.

We, Dick and I, are both AHBA Herding Judges.  I just finished my requirements for an AKC Herding Judging license, and became an AKC Herding Judge.  We are currently Associate members of the Rocky Mountain All Terrier Assoc.   Members of the Buckhorn Valley Kennel Club, Continental Divide Herding Club, and the Working Kelpie Inc.; and the American Herding Breeds Association.  In addition, I am also an associate member of the North Texas Norwich Terrier Club.

We encourage any questions you may have concerning our Kelpies or our Norwich Terriers.  We would strongly recommend that you visit our home and meet our "Little People" and the Kelpies and get to know us a little better in person.

Just got back on December 6th from the 2010 Eukanuba Sponsored Dog Shows in Long Beach, CA.  What a happening that is.  Saw lots of great dogs shown.  Skyscott's Poker Chip won the Norwich Terrier Best of Breed 3 days, and placed 3rd in the Terrier Group twice.  What great wins.  Go Pokey!!!!  Pokey is the Number 1 Norwich Terrier in the Country, and the number 4 Terrier in the country.  I had a great time with good friends.  It doesn't get any better than that.

Since 2010, Edna has been showing her Norwich Terriers, with a lot of success.  We have been showing in States from Texas to Idaho, back to eastern South Dakota, and of course Colorado and Nebraska.

We have also started working with Border Collies with the idea of my showing them AKC and doing some arena trials locally, as well as field trials in the future.  Dick has started his Border Collie career with a bang, by winning the 2014 Wyoming State Fair Sheep Trial.  He also shows at the Cattle Dog Trials held here in Wyoming.
It is a past time that is reflective of both our herding pasts on the ranch.  And we have met wonderful people and had a wonderful time competing. 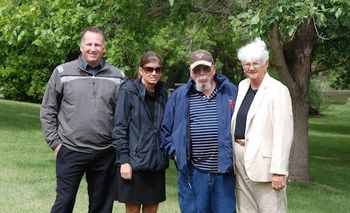 Recent photo of our family. From left to right. Our son Jerry, our daughter Stephanie, and lastly Dick and Edna. 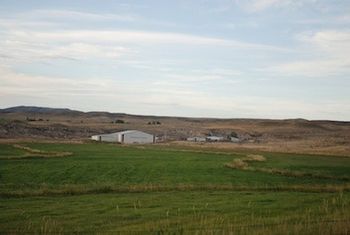 Our 30 acre meadow that we irrigate and put up hay for winter feeding to the sheep.

View from our deck looking east over the lake to our east fence running north and south up the big hill. 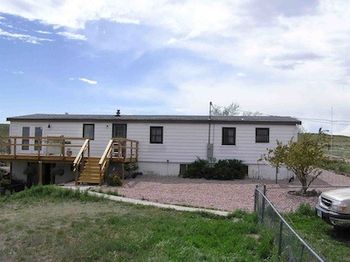 Our house and front yard. We recently covered the deck. 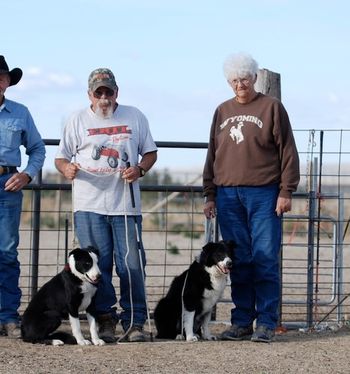 Dick and I with our herding dogs from fall of 2009. 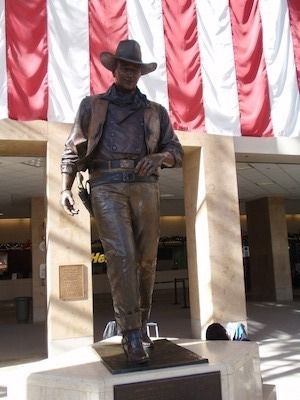 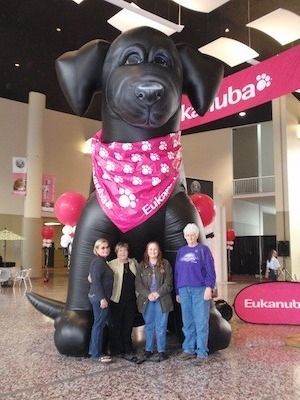 From left to right Caroline, Sharon, Nan, and myself. What a great place to see with good friends. Eukanuba was awesome!!! 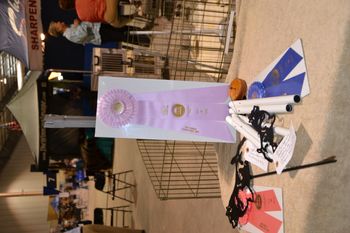 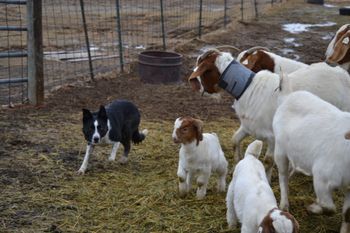 Lynn putting goats in the barn 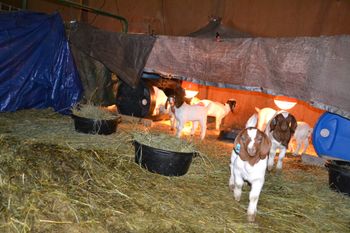 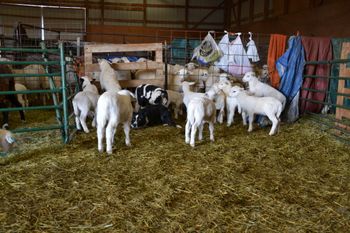 Baby lambs surrounding Lynn, they are facinated with him